Swim for 1.8km’s, Cycle for 90km’s and then run a Half marathon. The First Half Iron Triathlon I’ve ever done was obviously very special to me. Despite my condition, at the time I did try my best to train sufficiently for the same. For those who don’t know, at the time I was dealing with a lot of Iliotibial Band issue and every small run would basically cripple me with unbearable pain. Although extremely stupid, I thought the triathlon would be a great way to stay fit and be in shape while I dealt with my injury. One must wonder, did I not know about the half marathon at the end?

The Training went as planned swimming in the mornings, failed attempts to run pain-free and commutes to work were a standard practice. For the race, I decided to test out the bike that had just come out of the prototyping oven. We had no name for the bike then and just called it the second bike (Now it is named as Aspera under Convolution Brand). Most of my commute training sessions were done on this bike and after a lot of deliberation I decided to use the same for the race as well (Best decision ever!).

Swim: The Race day was a Big pile of mistakes. The first being forgetting my swimming Timing Chip at home and ending up coming to the start late. That caused me to start almost an hour late as compared to my competitors. The anxiousness of having to wait for a long time before the swim actually caused a lot of anxiety. Once I got to the swim leg (finally!) I did my best to stay calm and keep moving at a steady pace but seeing all the other half iron guys almost come out of the water when I had barely finished the first 200meters was very nerve-racking. After finally getting out of the water 57 minutes after I got in (Really slow I know!) I rushed towards the first transition zone in extreme haste. Had a sip of water, donned my tri-suit and straight away headed for the bike leg of the triathlon.

Bike Setup: Let’s talk about my setup for the race. I was using the convolution bikes Aspera for the race, with Shimano 105 group set gear train. Used a Velo saddle and cheap Btwin aero bars for the aero setup. I was using the Giro standard non-aero helmet and I used normal flat pedals with toe clips. I wish I’d taken up using clipless pedals back then. The tyres we used were Maxis Refuse 700x32C with puncture protection. 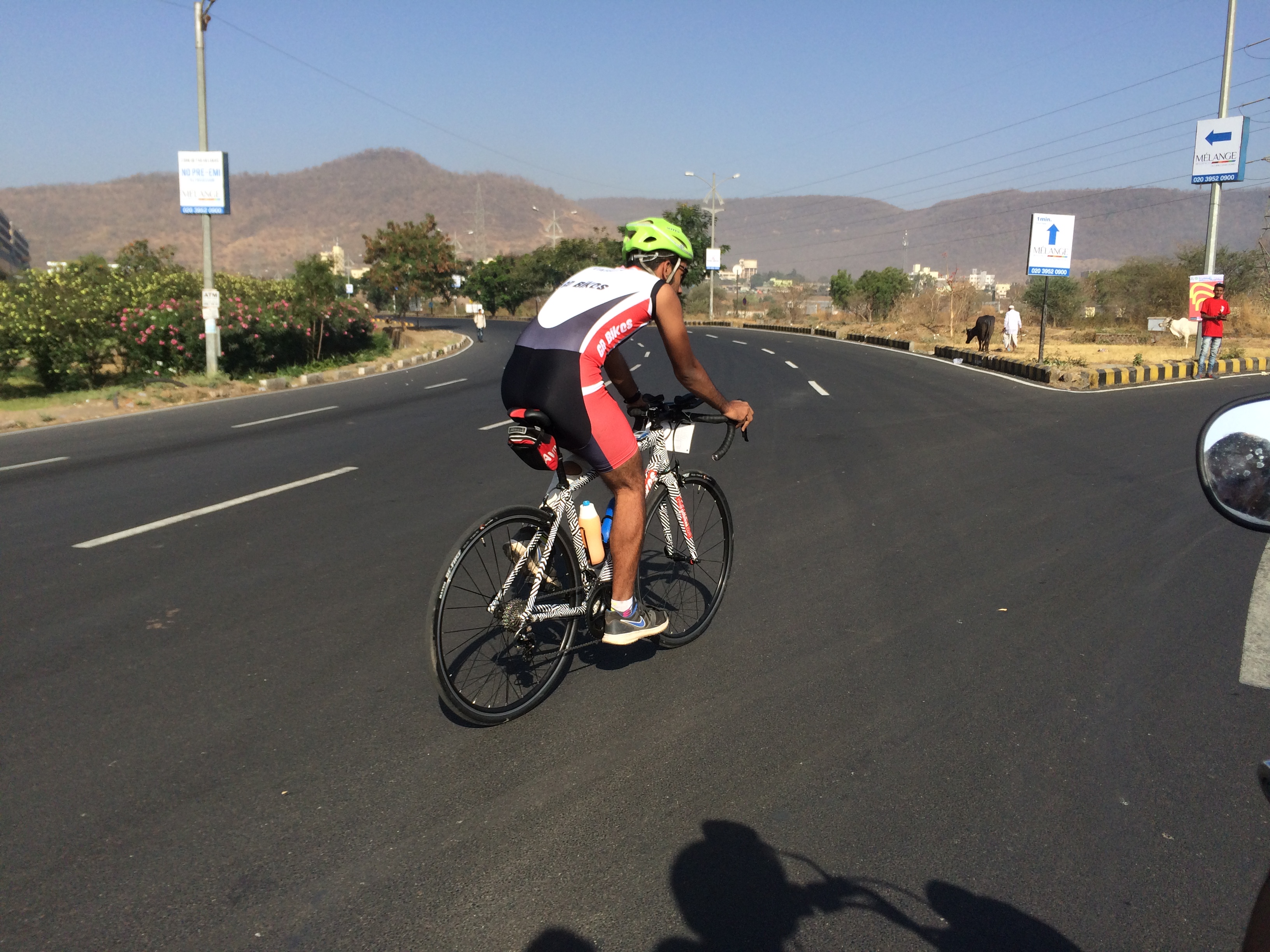 Cycling: My cycling leg began with a relatively steep climb, that all thanks to my affinity to train in hilly terrain was a piece of cake, 4kms into the race came a huge decent that I completely bombed. For almost the next 30kms the terrain was relatively flat and was averaging close to 32kmph for the ride till then. We then split on to the part which was riding along relatively rural roads. This part was a loop that was almost 50kms in total. The second loop was quite challenging because the aid stations had run out of the water and they had absolutely no electrolytes. I had also run out of whatever I had put in my water bottles. It was an especially hot afternoon and the lack of water was a total killer. The respite came in the form of a kind shopkeeper who himself volunteered and very graciously offered me some water. The bike was an absolute pleasure to ride on. The Plush fat 32mm tires came in very handy while cornering and for the one time when buffaloes crowded the road and I quickly got off the road to avoid slowing down. The bike also handled very well when it came to high traffic areas and was quite responsive on the climbs. The only places I felt some changes could be made were the last few climbs where I felt the fat tires were kind of dragging me down with them.

The bike leg of the race was the best part about the whole race for me because I almost caught up with a huge portion of the Half Iron guys during this leg and also exceeded my expectations. Despite the random stopping for water and totally bonking in the 78th km I still managed to finish the bike leg in 3 hours and 9 minutes. Averaged almost 30kmph if one only considers the ride time which felt great.

Running: As I came into the second transition there was nothing significantly transitive for me and so it went by really quickly. I started the run very hopeful that my knee pain wouldn’t act up and for a while, it looked like it wasn’t going to. My company for the initial few kilometers was a triathlete from Mumbai who was also an avid traveler and globetrotter. Many kilometers passed by and we kept on chatting about couch surfing, random encounters, and bizarre experiences. While my knee initially felt okay, around kilometer eight it was starting to get my attention. By kilometer 10 I was reduced to limping and it was the worst I’d ever felt thanks to very poor efforts taken for hydration at aid stations. The next 11 kilometers were limping and walking respectively which slowed me down by a huge margin. Usually, even on a bad training day, my half marathon time would be close to a 1:50:00 but that day it was a total disaster. Finally, I limped my way to a 7:12:45 finish and earned the coveted medal and a Maharashtrian cap that announced to the world that I was a Half Iron Finisher. 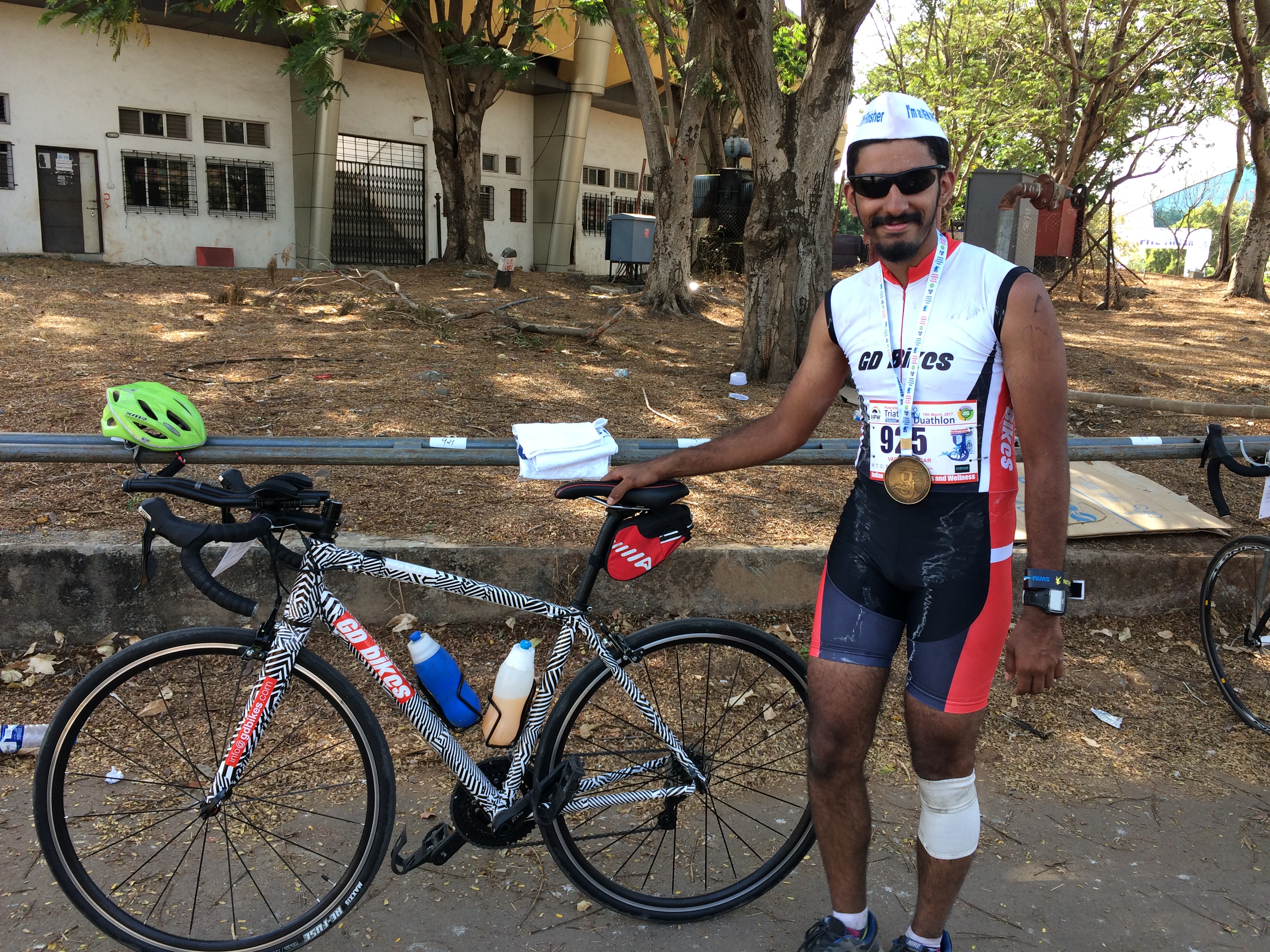 While the timing is far from what I’d have liked it to be and I ended up injured yet again this is a race that taught me to be tough no matter what the odds and also to never take the easy road just because you’re in pain.